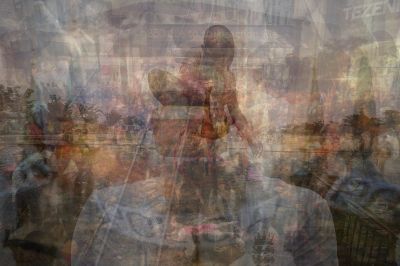 Stephane Blumer: Hacking, Anthropology and Art
visual artist and Phd student
KH: You’ve recently embarked on a research project as a PhD candidate in anthropological studies at EHESS Paris, focusing on the hackers community. How does this relate to your work as a visual artist?

Working as a visual artist has contrastive output with the academic work that I produce since 2015. Even if both are research based commitments; processes length, methods, exposure and restitution are very disparate in each activity. For now, I don’t feel the need to relate one to the other explicitly.
A first difference among both activities is the pace. Before finishing a PhD thesis and defending it, there is no feeling of achievement, or so little. Certainly, along the way, there are lectures, sharing of data with peers and confrontations. Whether its a maze or a straight path, a thesis leads to a precise objective.
On the other hand, in art, I authorise myself to be more immediate, giving access to a fulfilling realisation at anytime. Being overtly and too readily satisfied with the immediacy in the making of artworks is also dangerous. Since I started an academic research, I also take my time in art in producing artworks.
It’s hard to combine anthropological methods of research and artistic processes, because I feel their modus operandi is incompatible. Each one has its own a priori relationship to reality. As unmasking or deconstructive as it may be, anthropology and ethnography aim to privilege a certain status quo. In the discipline, what is considered to be a ‘good’ ethnography, is the one that transcribes the more authentically possibly what has been observed in a specific space-time frame with the main purpose to describe it. Briefly, anthropology could sometimes, prolongs the order of things. This pledge has all sorts of strong outcomes, such as documenting disappearing practices and cultures, and giving deep accounts on complex social phenomenon that are difficult to understand, but it also confines a discipline into itself. Being totally objective is impossible, neutrality doesn’t exist. Conscious of this limit, anthropologist have since more than 60 years, understood that by observing and, focusing and exposing on an object, the anthropologist’s choice is already contrived and this has a direct impact with the investigation’s objects results. The subjectivity of the researcher is acknowledged in most contemporary anthropological
investigation researches. This ambiguous position might be complicated - in social science there are tools to avoid a too biased observation.
Conversely in art, there must be a friction with the real for it to be thought. Arguably, one of contemporary art characteristic process is to reconsider the status quo through the production of (counter)discourses. Even if the practice is based on producing documentaries of real situations - the realm produced by the artists induces a fictitious space enabling for a diverging interpretation of reality. This standpoint is therefore quite different than the anthropological telos.
Even though this relation to reality diverges, of course, doing a PhD in anthropology feeds my art practice and vice-versa. Within the above-mentioned difficulties, as some anthropologists do, I try to produce an anthropology which doesn’t necessarily prolongs or promotes the object that it scrutinises but intend to hijack it, as I would in art attempt to divert a too conventional way of looking at things. In this case, art and anthropology could potentially distracts current hegemonies by contributing to the construction of new subjectivities and ways of being together.

KH: In the recent presentation of your work , you showed some material on the rituals of a specific hacking community you’ve been studying, do you think in some way artistic communities have their own codes, rituals and political orientations, if not followed, you’ll never be accepted/integrated? If you feel there are rituals in the arts to be identified what would they be?

I believe that any social institution constructs its own codes and rituals, according to contextual beliefs and practices and art is only one of them. Political orientations, however, are reversible. In regards to acceptance, I don’t think that, in the arts, one should be too concerned by it. An artistic community might become too manufactured if one is constantly seeking for acceptance and adapt/or try to fit in specific contexts. A calligraphy curator in Beijing once told me: “Don’t try to please your audience”. Easy to say, hard to do. Following Erving Goffman, a sociologist who has been inspired by Gregory Bateson concepts,rituals designate specific contextual “frame”. One could look at it as an ensemble of action, related to fictitious rules, very close to the notion of “play”. In the case of hacking communities, I have been observing daily rituals to share ideas, as a strategy to render common decision making processes the most horizontal possible. Rituals are the frame necessary to invent. Also, artists have all their own rituals, aiming at helping them in the making process. These made-up rules (no rule, could be a rule) are driving the practice as well as reshaping it constantly. Producing your own rituals, rules, allows for creating temporary autonomous mental spaces (remembering the TAZ from Hakim Bey) - and this, to me, is essential to probe new ideas - culture is a construction and it should never seize to re-invent itself.

K.H: Are you familiar with the ideology of the Russian-American philosopher and sci-fi script writer Ayn Rand who inspired the Silicon Valley MIT engineers by promoting individualism and self-achievement? How do you explain the paradigm shift in the community of coders, programers and engineers giving way to such communities as the one you are working on showing an idealistic and utopian vision of an equal society?

Ayn Rand’s sci-fi epic books have regularly inspired generations of the elite and this is due to all the ingredients embedded in her self-proclaimed philosophy “objectivism”, namely rationality, self-interest and competition. There are many different paths that developers and engineers are following - and I don’t think that it is a paradigm shift, which one could observe when it comes to such communities. There is always antagonistic aims and purposes within similar social groups, classes or casts.
In regards to hackers, some are selfless others are entrepreneurial and orient their practice for the sole purpose of personal achievement - Again orientations are heterogeneous and we can’t just define a tendency within hacking practices. The groups that I am interested in my thesis are in fact channeling efforts towards the production of commons, having decided to redistribute their skills and knowledge for altruistic purposes. This gesture also contains contradictions and divulges problematic conflicts of interest – which, in turn, reveal what is at stake in the current dominant economy system in relationship to individual/collective interests as well as local/global governance apparatuses.
For more information on Stephane Blumer: http://www.stephaneblumer.com/#/
HOME | ABOUT | PROJECTS | PRESS | SPONSORS | CONTACT