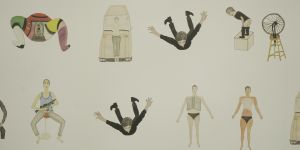 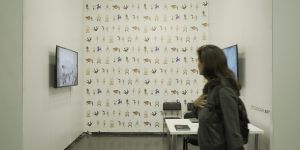 Images of the Wallpaper

The Artist is Present is a limited edition wallpaper by Lebanese artist Sirine Fattouh composed of a pattern of 10 original drawings.

Sirine Fattouh revised the history of conceptual art from a feminist perspective. She drew herself in the same position than the famous performance artists, who are for some, her mentors such as Orlan and some others, artists she admires.

These drawings although naifs are several homages to artists who played a key role in contemporary art such as : Valie Export, Orlan, Klein, Duchamp, Oppenheim, Shadi Ghadirian, Chris Burden, Niki De Saint-Phalle and in other moments there are attacks as the one on Koons.

The reference to Orlan’s performance, Le Baiser de l’artiste, which took place during one of the famous editions of the French art fair FIAC, particularly inspired Fattouh. Orlan would offer a kiss to any visitor giving her 5 franc and as a result of this radical gesture, Orlan lost her job as a teacher.

The title of this wallpaper work makes another reference to the famous performer Marina Abramovic and her performance at MoMa The artist is present .

Although looking at others, Fattouh chose to put herself in the center of this work, as a reflection on her roles as an artist, a feminist, an LGBQT activist, a researcher since these roles evolve in the constantly shifting realities of the Middle East .

She is a visual artist and researcher born in 1980 and living between Paris and Beirut. Interested by histories from below, her work, as an artist and researcher consists of examining the consequences of violence and displacements on people’s identities.
Fattouh holds a PhD in Visuals Arts and Aesthetics from the University Paris 1 Pantheon-Sorbonne and a Masters degree from the Ecole Nationale Supérieure d’Arts of Paris- Cergy Pontoise. She taught Visual Arts at the Sorbonne University and is affiliated with the Research Center in Visual Arts . In 2011, she was assistant curator for Middle Eastern Art at the Centre Pompidou in Paris.

She has exhibited her work in group shows and solo exhibitions such as Centre Pompidou ( Metz, France), MAXXI Museum (Rome) and Fondation d’Entreprise Ricard (Paris) amongst other institutions. She is represented by Letitia Gallery in Beirut.